Sacrifices To Remember On Memorial Day 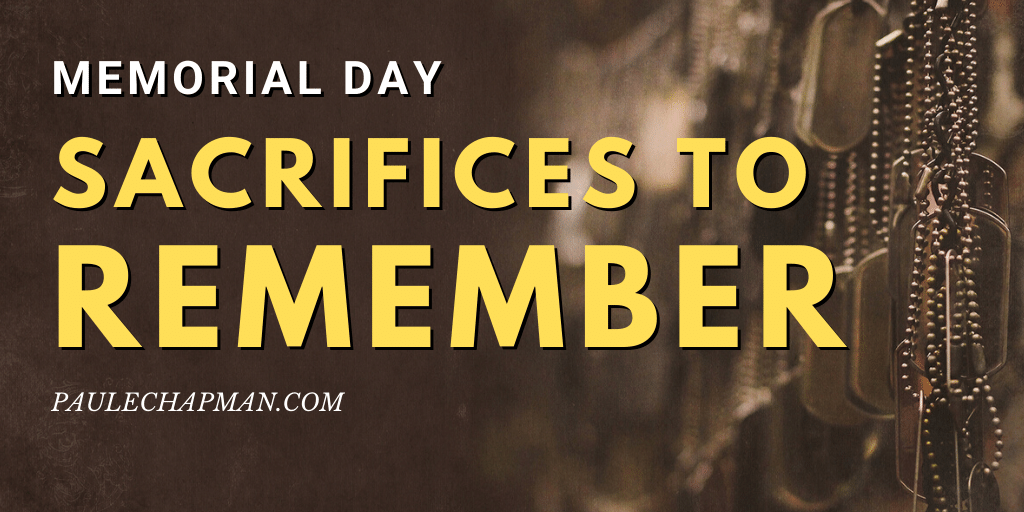 Some things should never be forgotten. Remember these selfless sacrifices today and follow their example for a bright future.

Have you ever forgotten something of importance? A birthday? An Anniversary? An Appointment?

The Bible gives us many instances of mankind’s forgetfulness.

“Yet did not the chief butler remember Joseph, but forgat him.”

“And the children of Israel did evil in the sight of the LORD, and forgat the LORD their God, and served Baalim and the groves.”

“And forgat his works, and his wonders that he had shewed them.”

“They soon forgat his works; they waited not for his counsel:”

“They forgat God their saviour, which had done great things in Egypt;”

“And thou hast removed my soul far off from peace: I forgat prosperity.”

“And I will visit upon her the days of Baalim, wherein she burned incense to them, and she decked herself with her earrings and her jewels, and she went after her lovers, and forgat me, saith the LORD.”

These verses remind us how easy it is to forget.

One of the duties of a preacher is to help us remember.

This portion of Scripture teaches us five essential truths about remembering.

Memorial Day was instituted to help us remember the sacrifices of those who have gone before us.

First enacted to honor Union soldiers of the American Civil War (it is celebrated near the day of reunification after the civil war), Memorial Day was expanded after World War I to include American casualties of any war or military action.

It’s a good idea to set triggers to remind us of important things. Dates on a calendar, reminders, alarms, etc. prompt us to recall what matters.

On this Memorial Day, let’s consider some sacrifices that we should never forget.

1. Remember the Sacrifice of Soldiers.

America is the land of the free and the home of the brave. We have had a unique opportunity to live in liberty for almost 250 years.

The Declaration of Independence appeals to the self-evident truth of liberty.

“We hold these truths to be self-evident, that all men are created equal, that they are endowed by their Creator with certain unalienable Rights, that among these are Life, Liberty and the pursuit of Happiness.–That to secure these rights, Governments are instituted among Men, deriving their just powers from the consent of the governed,”

READ IT FOR YOURSELF: Link to the Declaration of Independence Here.

There are four kinds of liberty. Think about how each one affects your life.

Americans have enjoyed political and religious freedom that allowed them to exercise free-will and made available salvation to any who will listen.

It is purchased with blood and protecting by sacrifice.

American freedom exists because of countless acts of courage and sacrifice.

Review this list of United States casualties of recent wars.

Unfortunately, those born into freedom rarely appreciate it. They misunderstand its purpose and abuse it hurting themselves and others.

Our American Liberty is under attack today. There has been a battle for decades of the soul of America. Will we stay a free nation or will our liberties continue to erode as people reject God and replace Him with government?

President Barack Obama and his followers wanted to “fundamentally transform” America. He ended up being one of the most liberal Presidents in American history.

In this coronavirus lockdown, some politicians and pundits are working on using the tragedy to change America forcefully.

After years of failed coup attempts of fabricated scandals to remove a duly elected President, these unAmerican agents of change are tired of waiting. They will take America by force if we let them.

Don’t forget the sacrifice of the soldiers!

They didn’t die for us to become socialists. They didn’t serve to instill communism lite. Remember their sacrifice and remember what they purchased!

Did you ever notice that the common man in communist countries is not a proponent of communism? It is the stuffy college professor and the impressionable idealist that tout its benefits.

Communism (and the atheism that accompanies it) is responsible for over 100 million deaths in the last 120 years. That doesn’t include the untold suffering of those who died slowly in its clutches.

It always bothers me when I hear someone call the United States a democracy. The US is NOT a democracy.

America is a Constitutional Republic. (Learn the difference here.) People have given their lives to keep it that way. Don’t forget their sacrifice!

Socialism, facism, statism, communism, and all the other -isms have been at the door since our nation’s beginning. Proponents of failed and ungodly philosophies have drooled over control of America for years. Only those who forget our miraculous founding and heroic protectors will give into their unbiblical ways.

We must remember the sacrifice of our soldiers! We cannot allow our country to fall into the hands of power-hungry would-be potentates who spit on the graves of those who came before!

2. Remember the Sacrifice of Parents.

Space does not permit a full accounting of the sacrificial cost of raising children. Yet, some grow up to despise their parents.

“Hearken unto thy father that begat thee, and despise not thy mother when she is old.”

Can you imagine someone dishonoring and despising the parents that raised them from a helpless baby to a responsible adult? It happens.

According to Morgan Stanley, “Raising a child in today’s unpredictable economic climate is nearly 70% more expensive than it was just 15 years ago. In a 2014 report by the USDA, the estimated average cost of raising a child to the age of 18 is a staggering $245,000.”

That doesn’t include the time and emotional investment into every child. Diapers changed, meals cooked, “boo-boos” bandaged, dreams encouraged, and tears dried cannot be counted this side of eternity.

The only way you can grow up to despise your parents when they are old is to neglect their sacrifice for you.

3. Remember the Sacrifice of God.

Almighty God is the Creator of all things. By Him all things exist and consist. He is worthy of our worship and service for eternity.

God lavished on us unimaginable acts of unconditional love and sacrifice. He gave His only begotten Son to purchase our salvation.

“For God so loved the world, that he gave his only begotten Son, that whosoever believeth in him should not perish, but have everlasting life.”

Jesus Christ is the King of kings and LORD of lords. He left the glories of Heaven to walk as a servant among His creation.

In the ultimate sacrifice, He humbled Himself as the life-giver surrendered to death.

“And being found in fashion as a man, he humbled himself, and became obedient unto death, even the death of the cross.”

Never has their been a sacrifice of this magnitude or meaning. Since Christ sacrificed so much for us, there is nothing that we should not do for Him.

“Be ye therefore followers of God, as dear children; And walk in love, as Christ also hath loved us, and hath given himself for us an offering and a sacrifice to God for a sweetsmelling savour.”

“By the which will we are sanctified through the offering of the body of Jesus Christ once for all. And every priest standeth daily ministering and offering oftentimes the same sacrifices, which can never take away sins: But this man, after he had offered one sacrifice for sins for ever, sat down on the right hand of God;”

Meditate upon this illustration.

It is said that Cyrus, the founder of the Persian Empire, once had captured a prince and his family. When they came before him, the monarch asked the prisoner, “What will you give me if I release you?” “The half of my wealth,” was his reply. “And if I release your children?” “Everything I possess.” “And if I release your wife?” “Your Majesty, I will give myself.” Cyrus was so moved by his devotion that he freed them all. As they returned home, the prince said to his wife, “Wasn’t Cyrus a handsome man!” With a look of deep love for her husband, she said to him, “I didn’t notice. I could only keep my eyes on you- -the one who was willing to give himself for me.”

There are many things in this life that clamor for our attention. We will be courted by countless beauties and opportunities. Yet, they all pale in the glory of Christ.

May we never take our eyes off the one Who gave Himself to save us from Hell!

4. Remember the Sacrifice of God’s Servants.

“I thank God, whom I serve from my forefathers with pure conscience, that without ceasing I have remembrance of thee in my prayers night and day;”

You are saved because others obeyed the Lord.

You are blessed because Christians before you sacrificed.

It is not easy to serve God. The life of a committed Christian is one of sacrifice. Crosses must be carried, stripes born, and misunderstandings endured.

If you have the Truth, it was passed on you to at great cost!

It’s easy to forget the sacrifice of those who have helped us. We tend to remember every uncharitable word, human mistake, or perceived slight.

Instead, choose to remember their sacrifice. Thank God for the time they invested, the treasure they spent, the talents they used to help you.

Fill your heart with gratitude. If they are still alive, express your appreciation. If they are in Heaven, thank God for them and pass on their investment to someone else.

“I beseech you therefore, brethren, by the mercies of God, that ye present your bodies a living sacrifice, holy, acceptable unto God, which is your reasonable service. And be not conformed to this world: but be ye transformed by the renewing of your mind, that ye may prove what is that good, and acceptable, and perfect, will of God.”

Invest in Heaven, serving God by serving others. You will never be sorry that you sacrificed for God.

We are a forgetful people. These sacrifices must be remembered if we are to live in the blessings God has intended for us.

Remember and be blessed.

You can listen to the audio sermon based on this material below. 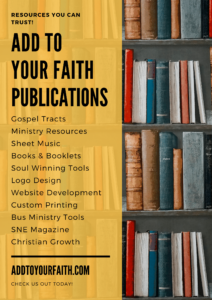 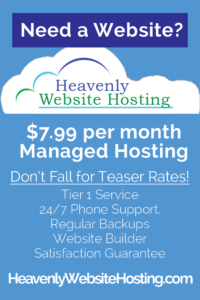