Jesus Christ The King of Kings 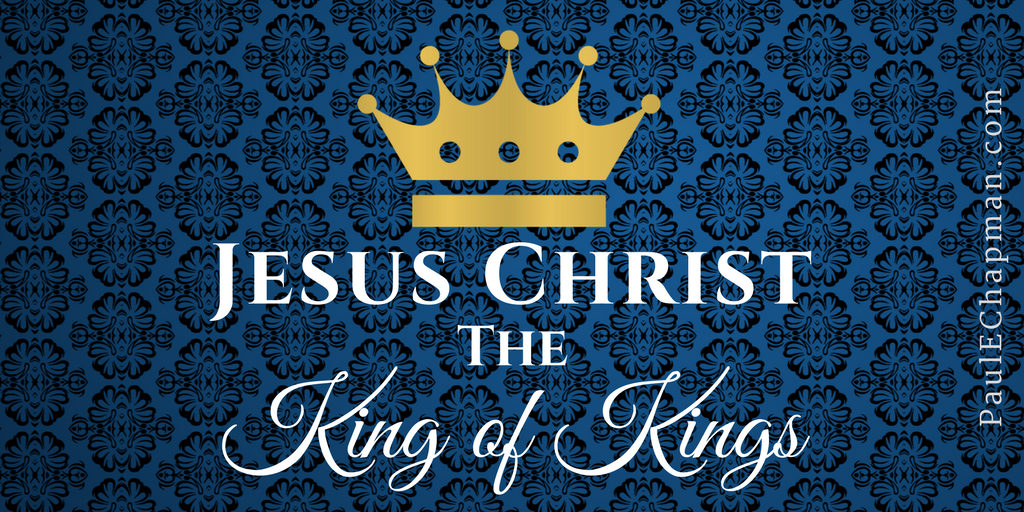 Jesus came the first time as the suffering Lamb.  He is coming again as the conquering Lion.  Be not deceived – Jesus Christ is the KING of Kings!

Some people forget that Jesus Christ is the KING.  They know that He came the first time to suffer and die.  They forget that He is the King Who died for His subjects to live.  The Creator submitted to His creation.  The Life surrendered to death.  Then He conquered death once and for all through the resurrection.  The next time he comes will be much different.  No more submission and death for our Lord.  People will submit to Him or face His wrath.  He is the KING of Kings!

Isaiah 9:6–7   “For unto us a child is born, unto us a son is given: And the government shall be upon his shoulder: And his name shall be called Wonderful, Counseller, The mighty God, The everlasting Father, The Prince of Peace. Of the increase of his government and peace there shall be no end, Upon the throne of David, and upon his kingdom, To order it, and to establish it with judgment and with justice From henceforth even for ever. The zeal of the Lord of hosts will perform this.”

Zechariah 9:9   “Rejoice greatly, O daughter of Zion; Shout, O daughter of Jerusalem: Behold, thy King cometh unto thee: He is just, and having salvation; Lowly, and riding upon an ass, And upon a colt the foal of an ass.”

Many verses in the Old Testament promise that a King and Saviour would come.  The Israelites waited for Him for thousands of years.  God’s timetable is not the same as ours, but He always keeps His Word.  His promises are always fulfilled right on time!

Matthew 21:1–11   “And when they drew nigh unto Jerusalem, and were come to Bethphage, unto the mount of Olives, then sent Jesus two disciples,  Saying unto them, Go into the village over against you, and straightway ye shall find an ass tied, and a colt with her: loose them, and bring them unto me.  And if any man say ought unto you, ye shall say, The Lord hath need of them; and straightway he will send them.  All this was done, that it might be fulfilled which was spoken by the prophet, saying,  Tell ye the daughter of Sion, Behold, thy King cometh unto thee, meek, and sitting upon an ass, and a colt the foal of an ass.  And the disciples went, and did as Jesus commanded them,  And brought the ass, and the colt, and put on them their clothes, and they set him thereon.  And a very great multitude spread their garments in the way; others cut down branches from the trees, and strawed them in the way.  And the multitudes that went before, and that followed, cried, saying, Hosanna to the Son of David: Blessed is he that cometh in the name of the Lord; Hosanna in the highest.  And when he was come into Jerusalem, all the city was moved, saying, Who is this?  And the multitude said, This is Jesus the prophet of Nazareth of Galilee.”

Jesus came “in the fullness of time.”  Gal 4:4  He was born of a virgin, lived a sinless life, and demonstrated a miraculous ministry.  The day of His annunciation had come.  According to prophecy, He rode into Jerusalem on the ass with the colt following.  Disciples went before Him and behind Him in a grand processional crying “Hosanna.”   This means “Lord save us now!”

Some spectators watched the parade go by and said: “Who is this?”  They did not know the Lord or recognize Him as King.  The Pharisees cried above the noise of the processional and the spectators asking the Lord to stop the disciples from what they were saying.  Luke 19:39  They did not believe that Jesus was the King.  I love our Lord’s answer.

Luke 19:40   “And he answered and said unto them, I tell you that, if these should hold their peace, the stones would immediately cry out.”

This was our Lord’s moment.  After years of His true nature being veiled, now He was being announced as Who He truly was – Jesus Christ the King!  He was offered to Israel as their King and Saviour.

This is one of the saddest verses in the Bible.  After thousands of years of waiting, God sent the Messiah.  He had finally arrived!  Yet, Israel rejected their King.

They were so blind to the gift they had been given that they chose a seditious murderer over the sinless Son of God!  The religious leaders convinced the people to ask for Barabbas.  Jesus went from being announced as King of the Jews to hearing the Jews cry “Crucify Him” in less than a week.  How fickle is mankind!  I’m glad I know Who Jesus is!  He’s the blessed Son of God, and He’s my Saviour!

Mark 15:6–15   “Now at that feast he released unto them one prisoner, whomsoever they desired.  And there was one named Barabbas, which lay bound with them that had made insurrection with him, who had committed murder in the insurrection.  And the multitude crying aloud began to desire him to do as he had ever done unto them.  But Pilate answered them, saying, Will ye that I release unto you the King of the Jews?  For he knew that the chief priests had delivered him for envy.  But the chief priests moved the people, that he should rather release Barabbas unto them.  And Pilate answered and said again unto them, What will ye then that I shall do unto him whom ye call the King of the Jews?  And they cried out again, Crucify him.  Then Pilate said unto them, Why, what evil hath he done? And they cried out the more exceedingly, Crucify him.  And so Pilate, willing to content the people, released Barabbas unto them, and delivered Jesus, when he had scourged him, to be crucified.”

God knew all of this would take place.  Our Lord had to die for the Sins of mankind as part of God’s plan.  Out of Isreal’s rejection of Christ came God’s invitation to the world for salvation.  God loves to bring great blessing out of perceived loss.  Jesus will save anyone who believes!  Have you accepted Jesus Christ as your Saviour?  If not, today is a great day to be saved!

Nothing could stop the crowning of the KING of Kings.  All the devils of hell and all the devices of man have no power to keep our Lord from His holy throne.  He is the Ruler of all.  He will rule and reign in Righteousness.  No longer will His nature be denied.  Every knee will bow!  Every tongue will confess!  Will you bow your heart to him now in faith and be saved?  Or must you bow your rebellious knee to Him after the opportunity of salvation has passed?  Either way, you will bow and you will confess that He is the KING of Kings.

Philippians 2:6–11   “Who, being in the form of God, thought it not robbery to be equal with God:  But made himself of no reputation, and took upon him the form of a servant, and was made in the likeness of men:  And being found in fashion as a man, he humbled himself, and became obedient unto death, even the death of the cross.  Wherefore God also hath highly exalted him, and given him a name which is above every name:  That at the name of Jesus every knee should bow, of things in heaven, and things in earth, and things under the earth;  And that every tongue should confess that Jesus Christ is Lord, to the glory of God the Father.”

Revelation 19:11–16   “And I saw heaven opened, and behold a white horse; and he that sat upon him was called Faithful and True, and in righteousness he doth judge and make war.  His eyes were as a flame of fire, and on his head were many crowns; and he had a name written, that no man knew, but he himself.  And he was clothed with a vesture dipped in blood: and his name is called The Word of God.  And the armies which were in heaven followed him upon white horses, clothed in fine linen, white and clean.  And out of his mouth goeth a sharp sword, that with it he should smite the nations: and he shall rule them with a rod of iron: and he treadeth the winepress of the fierceness and wrath of Almighty God.  And he hath on his vesture and on his thigh a name written, KING OF KINGS, AND LORD OF LORDS.”

I love Revelation 19.  It shows Jesus Christ the KING in all of His glory.  It reminds us how this world will end.  He is the conquering King of all.  We will have front row seats for His final victory.  He is without equal.  We will praise Him forever and ever!